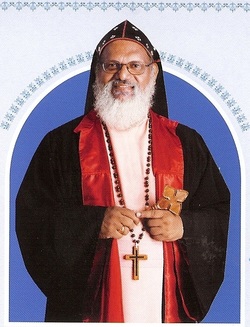 Mar Theodosius studied at Baselious College, Kottayam and Mar Thoma College Thiruvalla. After taking a degree in Science he joined Leonard Theological College and took BD Degree in 1972. His ordination as ‘Kasseesa’ was in the year 1973. In 1980 he took a Master’s Degree in Comparative Religions from Visva Bharathi University and Doctorate from Mc Master University, Hamilton, Canada in 1986. He was consecrated as Episcopa on December 9, 1989 along with Mar Athanasius and Mar Coorilos. From 1973 onwards he was in charge of several parishes including Mumbai, Calcutta, Toronto and Nanthancode and he served as Director of Thomas Mar Athanasius Orientation Centre, Manganam. On consecration as Episcopa he was given charge of Kunnamkulam- Madras Diocese.

Madras-Kunnamkulam and Kunnamkulam-MalabarTrivandrum-Quilon DioceseChennai - Bangalore and Malaysia-Singapore & Australia Dioceses
Dr. Geevarghese Mar Theodosius is a good scholar and his books on Reform Movements in Kerala and their Impact on Socio-Economic and Religious Life of the People have made a mark in academic circles.
Current Diocese : Mar Thoma Bishop of North America & Europe Diocese