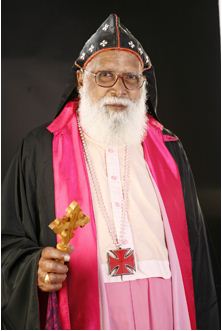 Having inherited the missionary zeal from his father, Vicar General Very Rev K E Oommen, he graduated from U C College Alwaye and took up the work in the Ashram at Ankola along with Rev. P J Thomas. He received theological education at UTC Bangalore and St. Augustine’s College, Canterbury. He became an ordained minister of the church in 1944 and was consecrated as Bishop with Alexander Mar Theophilus and Thomas Mar Athanasius in 1953.

He was in charge of different Dioceses in Kerala and also was Missionary Bishop for many years.
He was President of the National Christian Council of India and has attended the Assembly of World Council of Churches at Evanston in 1954, and at Upsala in 1968. He has been President of the different Organisations of the Church and the Governing Councils of different Colleges. He has attended the second Vatican Council and has thus made very valuable contributions to the ecumenical cause. He has deep concern for the upliftment of the backward communities. Through a registered organization named STARD (South Travancore Agency for Rural Development) he has helped economically backward communities of South Travancore to improve their lot and achieve self-reliance.

The administrative acumen of His Grace is far beyond what words can express. He is a spiritual leader, dynamic enabler, prolific orator, voracious reader, pungent writer, tactful negotiator, valiant defender of the law, compassionate at heart and a wonderful team man. He respects diversity of opinion, but would not easily budge or compromise ethical principles. He retains his lovable ness, humility and simplicity. He is a person with golden tongue, acceptable to all people irrespective of cast, colour or religious commitments.

His Grace The Most Rev. Dr. Theodosius Mar Thoma Metropolitan​ 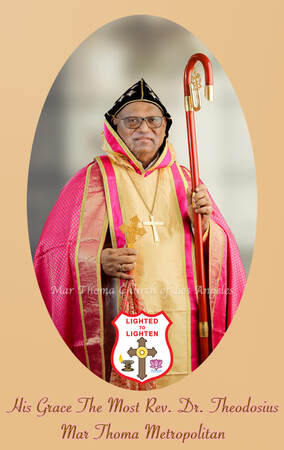 Mar Theodosius studied at Baselious College, Kottayam and Mar Thoma College, Thiruvalla. After taking a degree in Science he joined Leonard Theological College and took BD Degree in 1972. His ordination as ‘Kasseesa' was in the year 1973. In 1980, he took a Master's Degree in Comparative Religions from Visva Bharathi University and Doctorate from Mc Master University, Hamilton, Canada in 1986. He was consecrated as Episcopa on December 9, 1989 along with Mar Athanasius and Mar Coorilos
​.
From 1973 onwards, he was in charge of several parishes including Mumbai Santacruz, Calcutta, Parishes in Canada and Rochester in USA, Nanthancode and Calicut St. Pauls. He served as the first Director of Thomas Mar Athanasius Orientation Centre, Manganam. On consecration as Episcopa he was given charge of Kunnamkulam – Madras Diocese. He was the Episcopa of the Kunnamkulam- Malabar, Tiruvananthapuram- Kollam, Chennai – Bangalore, Malaysia – Singapore – Australia, North America- Europe Dioceses. He is presently the Diocesan Bishop of the Niranam- Maramon Diocese.

On July 12th 2020, he was given as the title, The Suffragan Metropolitan, during the service at Poolatheen Chapel officiated by the Metropolitan The Most Rev. Dr. Joseph Mar Thoma in the presence of the Bishops, Clergy and laity of the Church. 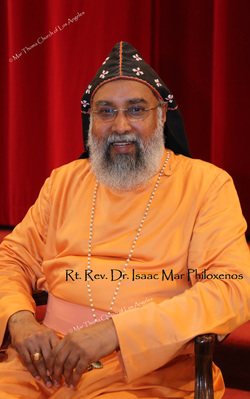 ​Rt. Rev. Dr. Isaac Mar Philoxenos took charge as the fourth resident Diocesan Episcopa on April 1, 2016
Mar Philoxenos was born on 1951, December 5 as the third son of A M Issac and Mariamma at Attupurathu House, Mavelikkara, Kerala, He had his schooling at B.H. High School and college education at the Bishop Moore College, Mavelikkara. He received his Masters degree in the Princeton Theological Seminary, New Jersey and Ph. D. from The Banaras Hindu University on the subject “The Doctrine of Grace in Vaisnavisim and Christianity”. He was ordained as the priest of the Mar Thoma Church in 1976 and consecrated as the Bishop of the Mar Thoma Church in 1993, while was a faculty of the Mar Thoma Theological Seminary, Kottayam.

He served as the Diocesan Bishop of the Bombay- Delhi diocese from 1993 to 2001. His vision and determination was instrumental in the formation of the Navjeevan Centre in Mumbai, for the rehabilitation of children from the streets and red light areas of Mumbai and a relief centre for HIV affected patients. . He initiated educational programs for children in the villages, especially of North India through “Gram Jyoti Schools”. He started “Dharma Jyothi Vidhya Peeth” at Faridabad, near Delhi for theological education in the North Indian Context. He planned and implemented child focused community development programs in the backward villages. He steered the relief operations at the Earthquake areas of Lathur in Maharastra, Jabalpur in Madhya Pradesh, and Bhuj in Gujarat in 1993-1994

He was in charge of the Kottayam- Kochi diocese from 2001 to 2008. He promoted the development in the high range area and emphasized the work against the social evils. He served as the chairman of the Kerala Council of Churches, Thomas mar Athanasius Memorial Research and orientation Centre and Thomas Mar Athanasius Institute of Counselling. Mar Thoma Guidance Centre and Munnar Retreat Home was built during his tenure.

He led the Chennai- Bangalore Diocese from 2009 to 2016. Thirumeni was keen in devising and implementing various plans to transform the Diocese into model diocese of mission. He initiated the development of the new Hospital and Guidance Home at Vellore and in acquiring land for mission work in Chennai, Sivanmpet (Sangareddy), Karaikal (Puducherry) and Bangalore.

His ecumenical leadership was so profound dynamic that he was elected as a member of the central committee of the World Council of Churches, the President of the Senate of Serampore College and Chairperson of Ecumenical Christian Centre, Bangalore.